The evolution of the snackpals prototype took place over a year in the IDEO CoLab studio, it was first an in-store augmented reality experience on a phone, then shifted to an in-store experience using installed hardware elements, and finally moved into the home as a projected group experience.

The original Snackpals concept was created as a concept considering ways we could create empathy for a user’s future self in terms of their physical and financial health. I helped guide the team to focus on building an augmented reality experience that would give healthy organic plant-based fruits and vegetables the same fun packaging that junk foods have.

The user would be able to peek into a new world that they haven’t seen before inhabited by creatures that lived on healthy foods. After finding these creatures, the child could capture and collect them by fulfilling their requests, which all revolved around trying new foods and eating healthy foods. In the app experience, parents could verify when a child ate the food, and the child would help their new creature grow.

The team and I created a live prototype experience over the course of two days to show how the experience might work.

The experience was powered by vuforia and unity for basic image detection and logic to pass data around for the experience.

I also created a companion design prototype that accompanied the experience to tell the story of how parents could verify healthy eating, and make contributions and get matches to their child’s 529 account.

we created a small marketing site for the product to display it’s brand along with gromplof’s story to introduce the concepts to both parents and children. The site featured many different animation and interaction elements to tell the story in a more immersive format.

The interactions on the site were created using svg objects and css animations for a smooth experience that felt more natural than a video or gif animation.

For our second exploration of the concept, we used our findings from the first sprint to form a new iteration of Snackpals, this time focusing on an experience that didn’t rely on a phone, and helped keep buying control of foods in the hands of the parent.

Inspired by food scales in produce aisles, we designed a tablet controlled store fixture called a snackscanner that would be equipped with a camera to study and reveal the creatures on any food that you place on the scale. The concept was prototype with paper and wood and an iPad to give the experience of zooming in on foods we placed on the plinth. I wrote a web app with pre-recorded zooming footage and displayed creatures on the food. A new element that was introduced was a physical method of collecting creatures as cards. Once the creatures on a piece of food were revealed in the app, the user could tap on one to receive a printed card of the creature that we slipped through the back of the prototype.

In the final iteration of Snackpals, we doubled backed on research and found that many parents found that even if they bought healthy foods for their kids, they were still picky when dinner time came around. After focusing on two in-store prototypes, we realized it was time to bring this experience into the home, even further into the kitchen. After many expert interviews it was clear that picky eating during childhood years formulates early on, our new focus became to create positive food experiences for kids and parents in the kitchen. 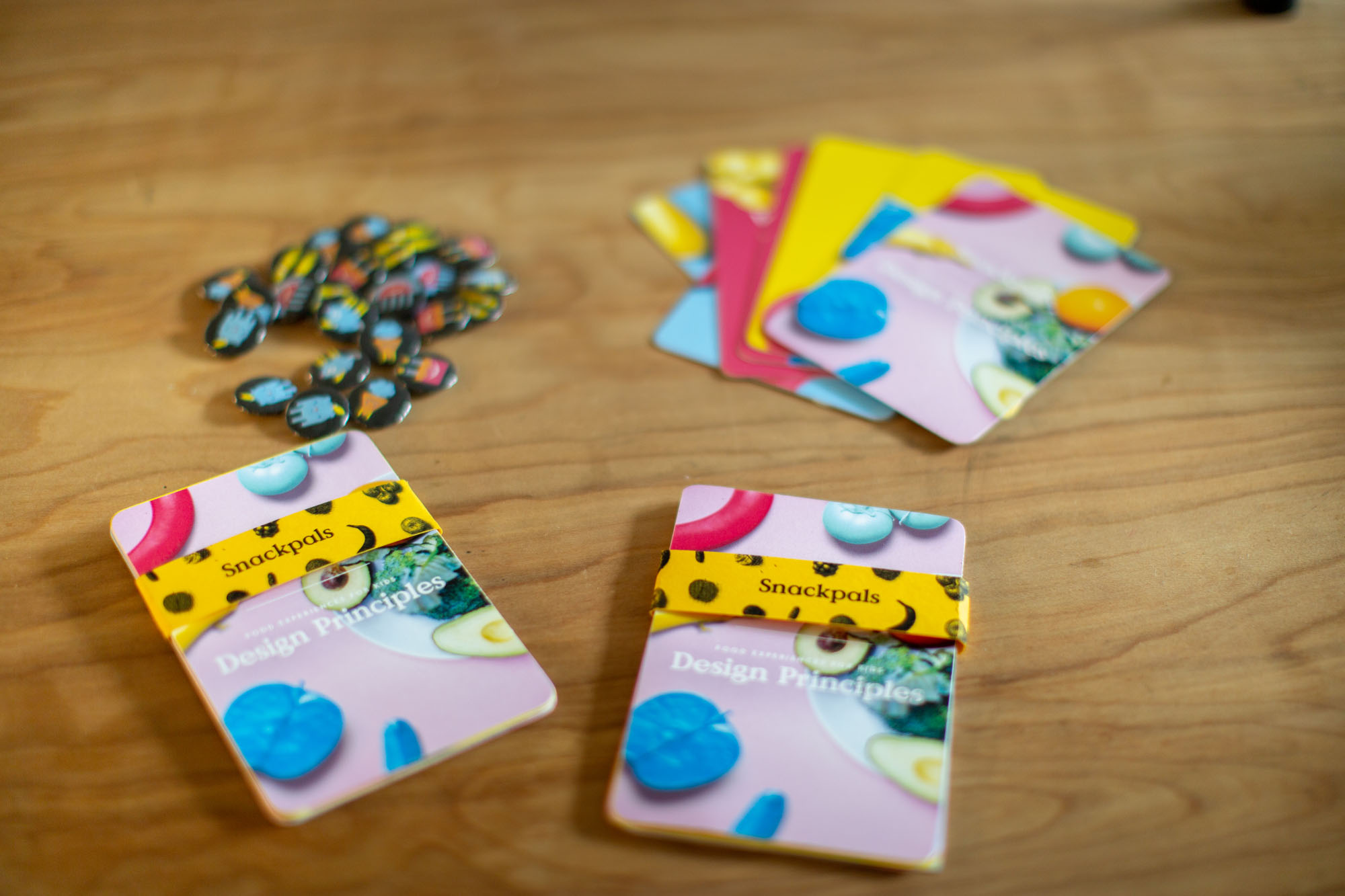 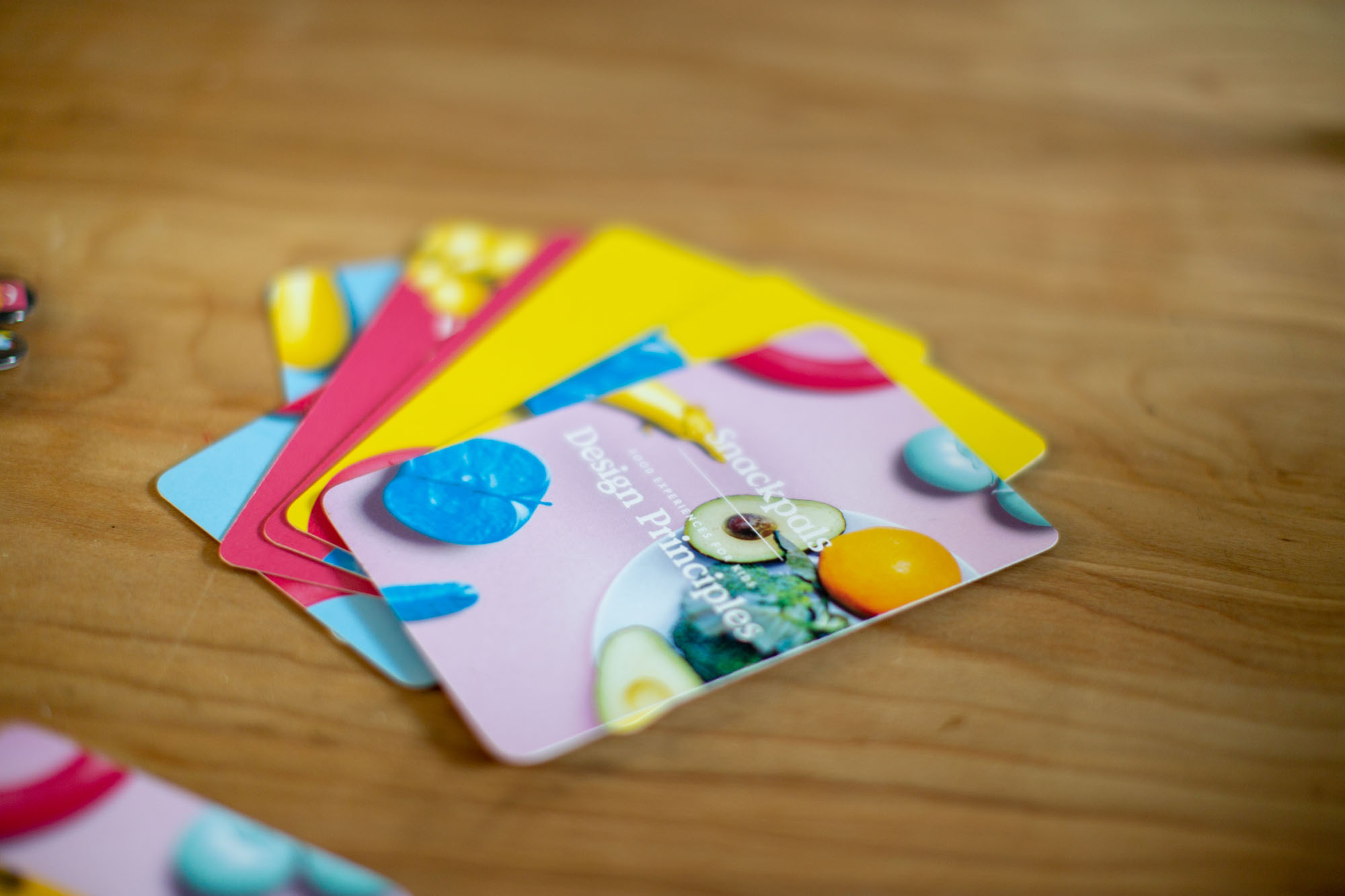 With this in mind, I guided the team towards a multi-party projection-based experience. This helped bring the experience out of a screen and into the kitchen space. The augmented reality kitchen prep-counter projected a food game that gave tasks for both a parent and a child or multiple children to do to cook a meal. Our demo experience focused on creating two difference types of snacks and lemonade for the science fair crowd. Two different people would come together to interact with the experience and work through the meal, placing difference parts of their prep-work into highlighted areas to progress from one step to the next. The entire experience featured our snackpals creatures, cheering when you were doing things slowly to keep your energy levels up. 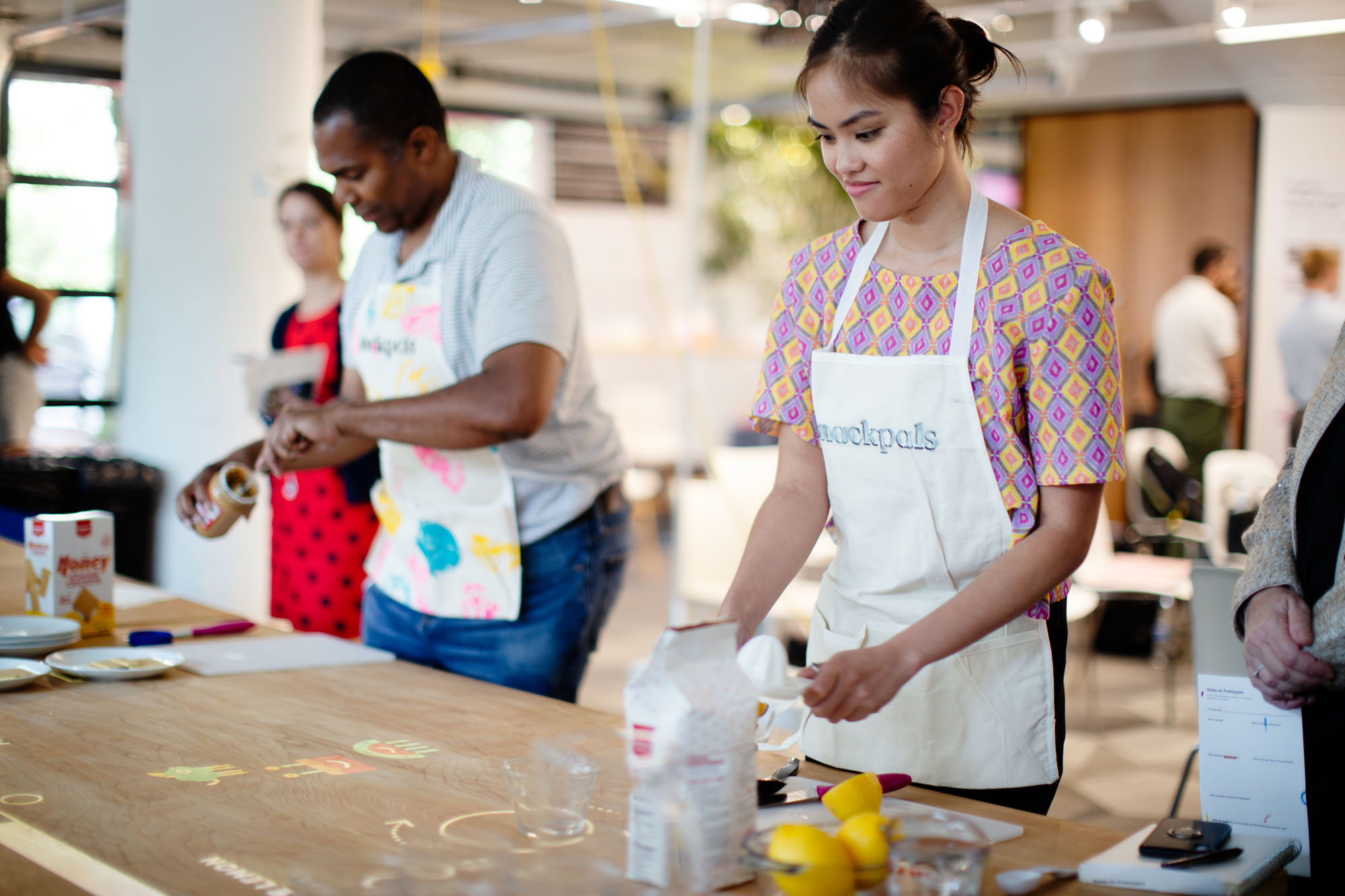 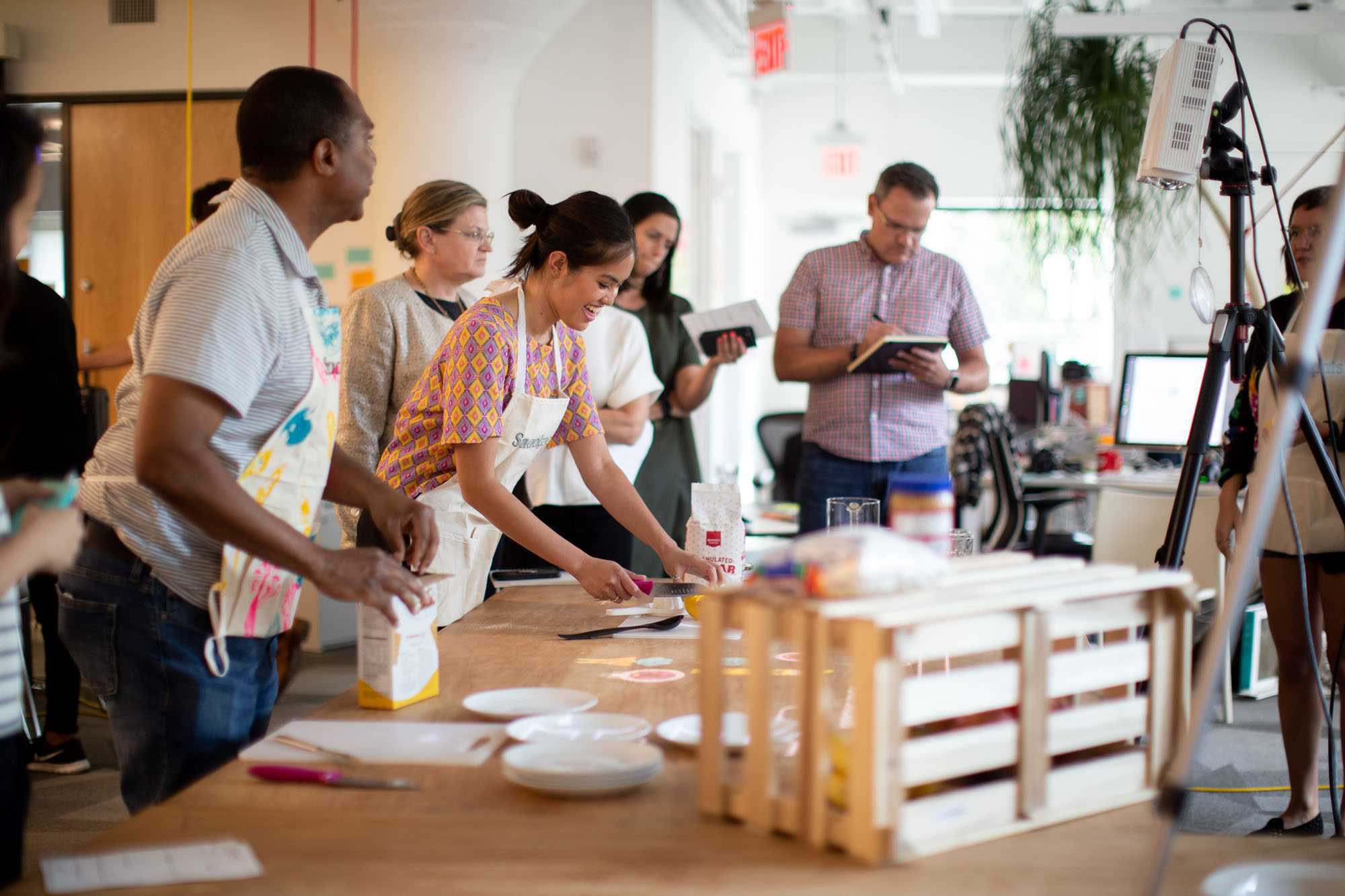 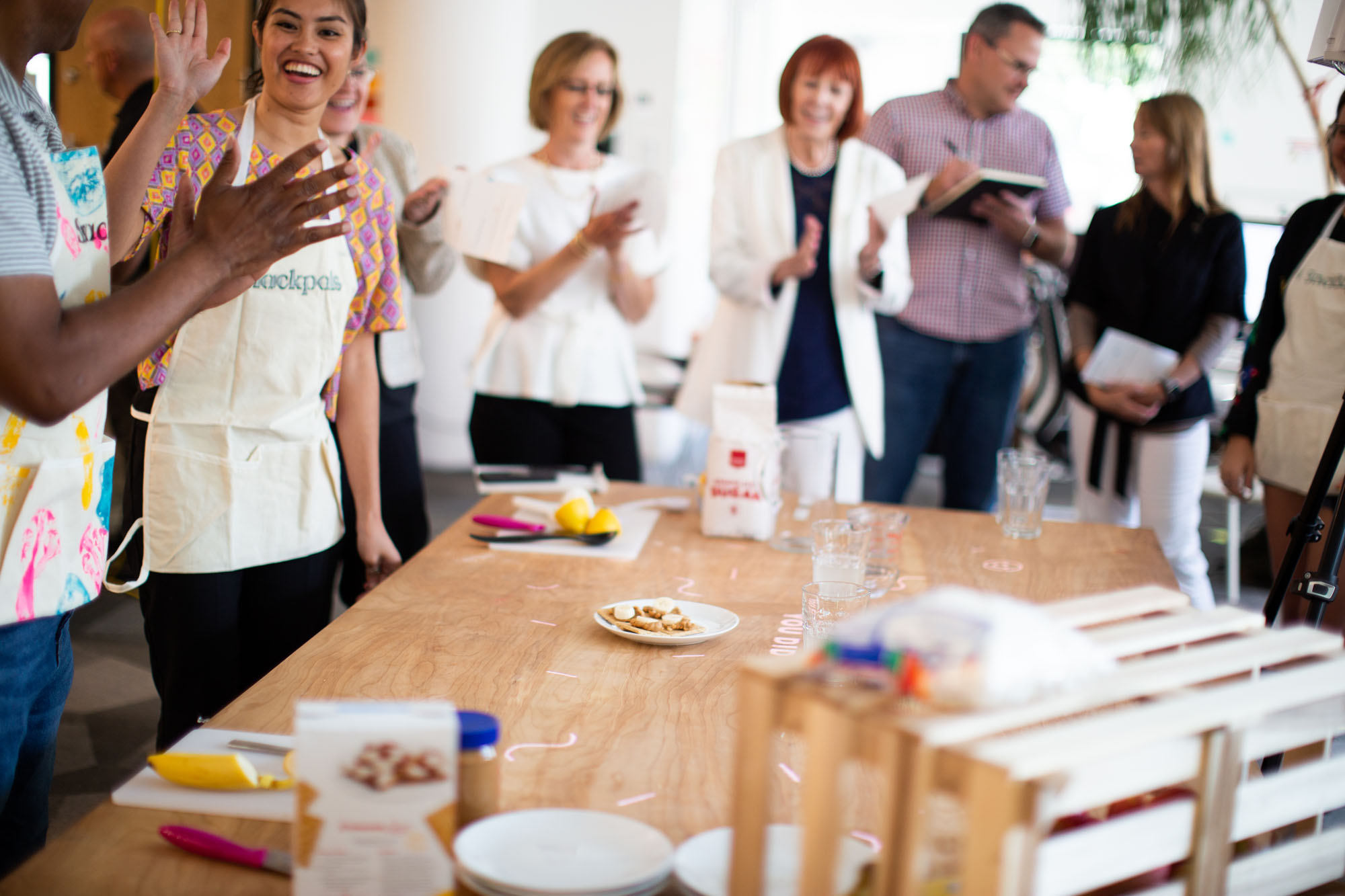 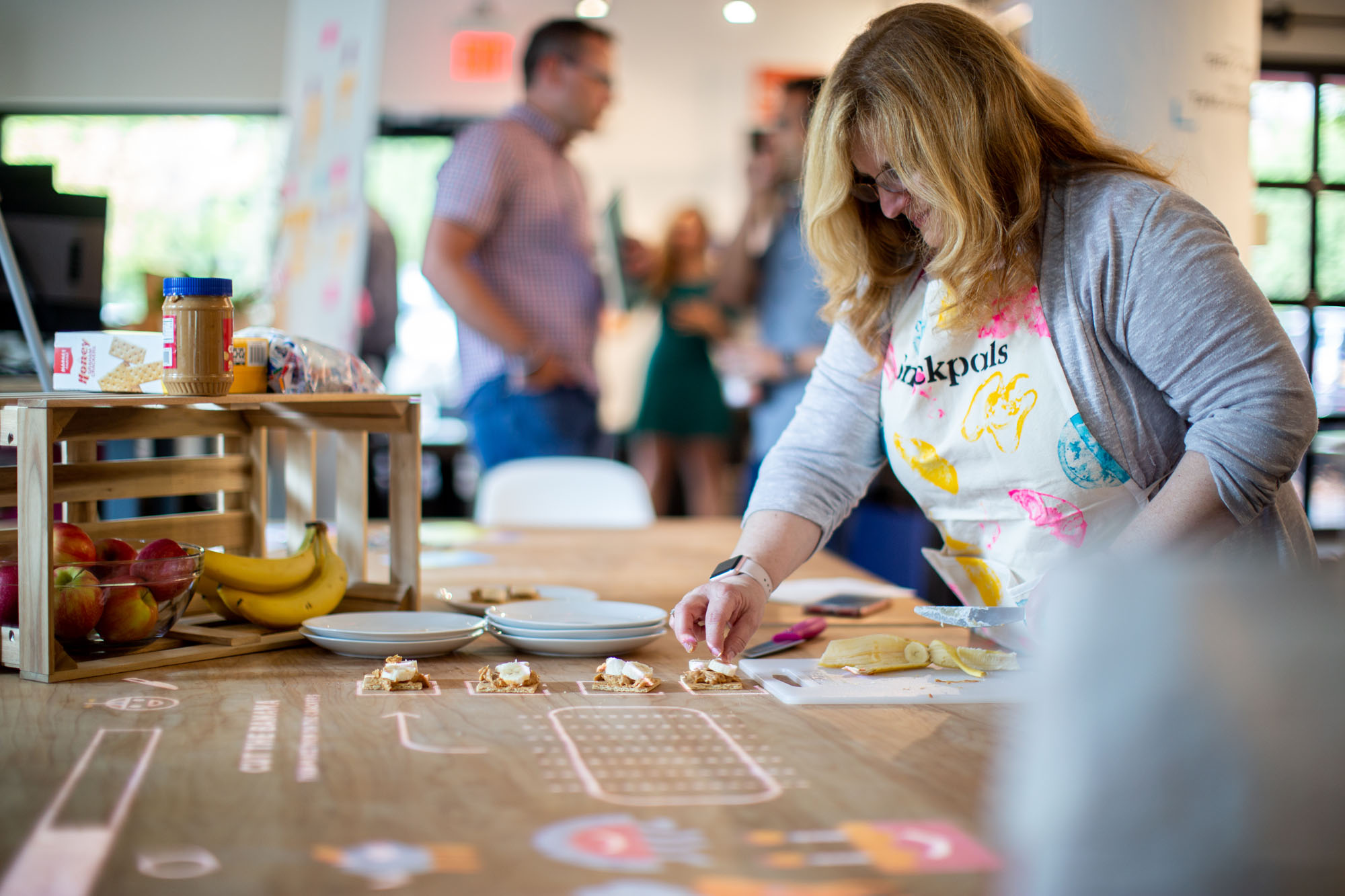 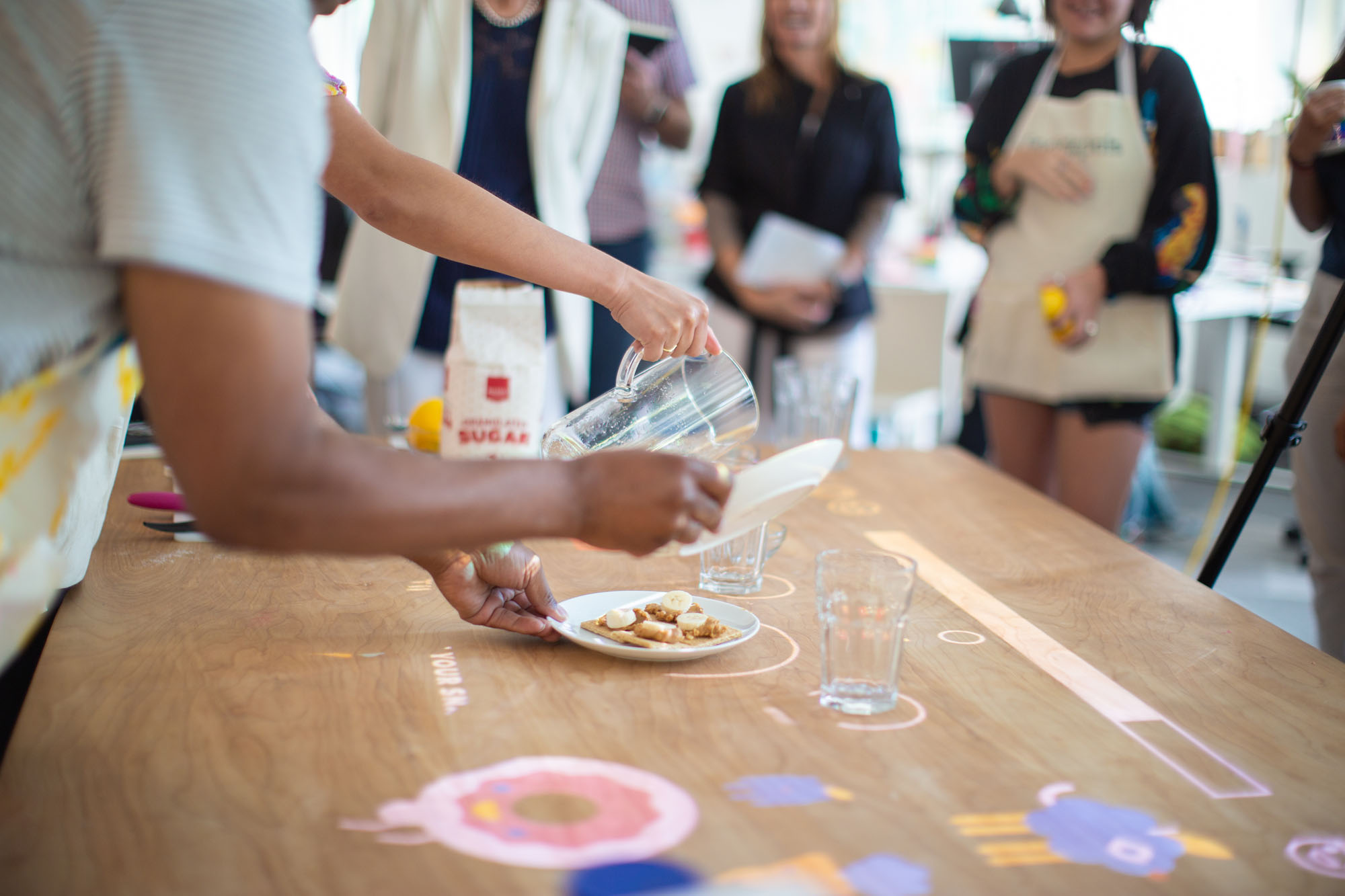 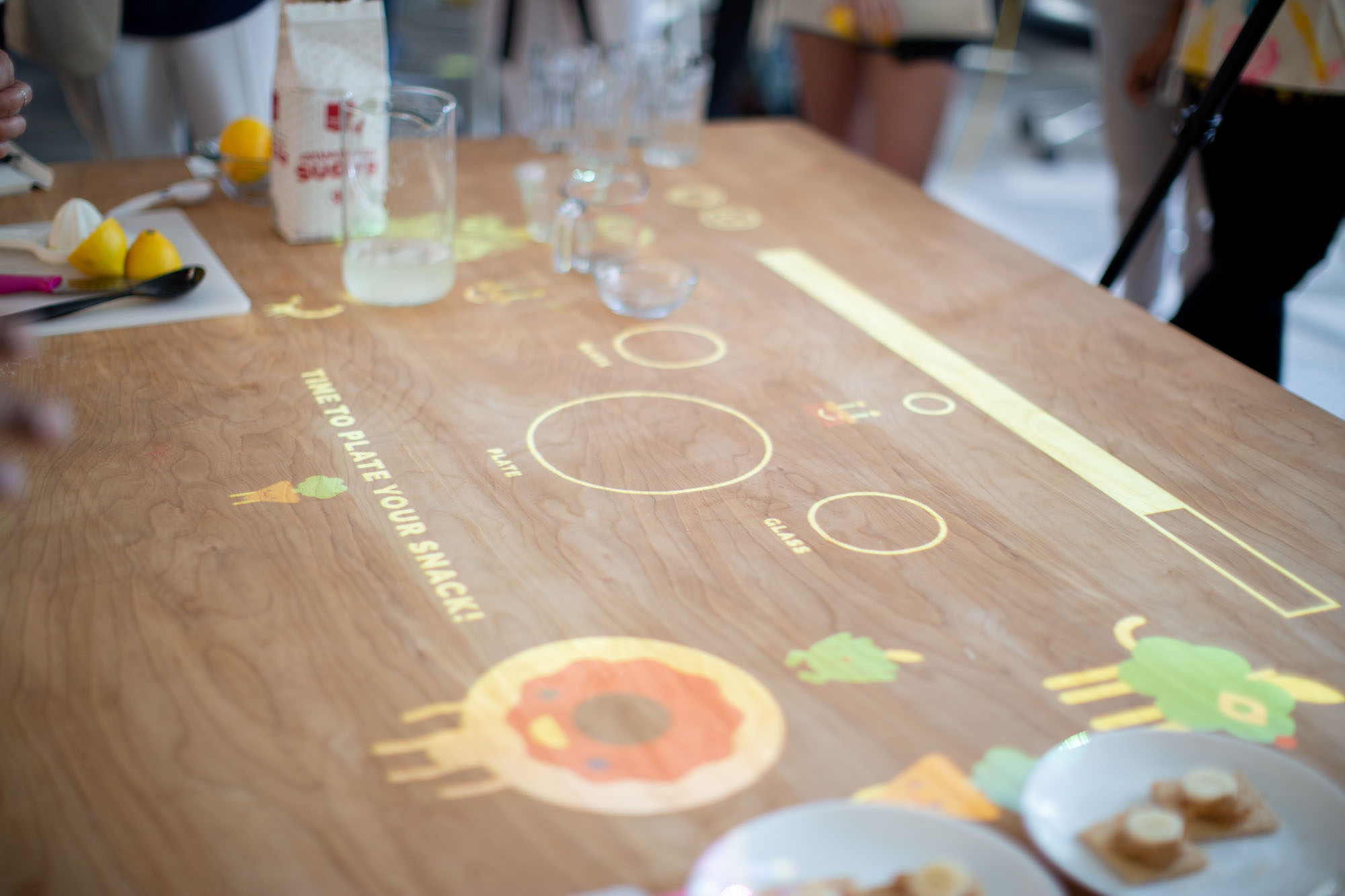 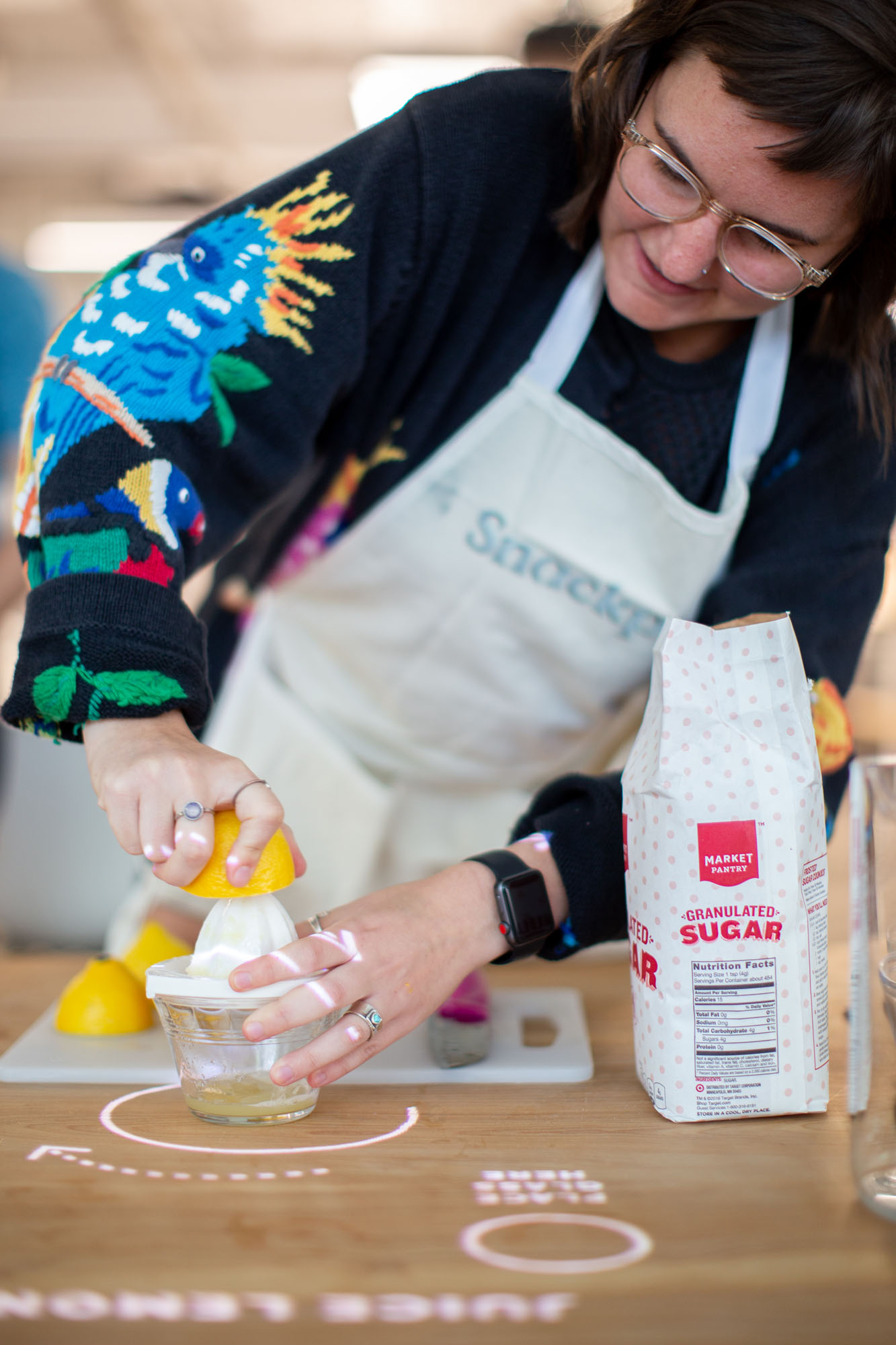 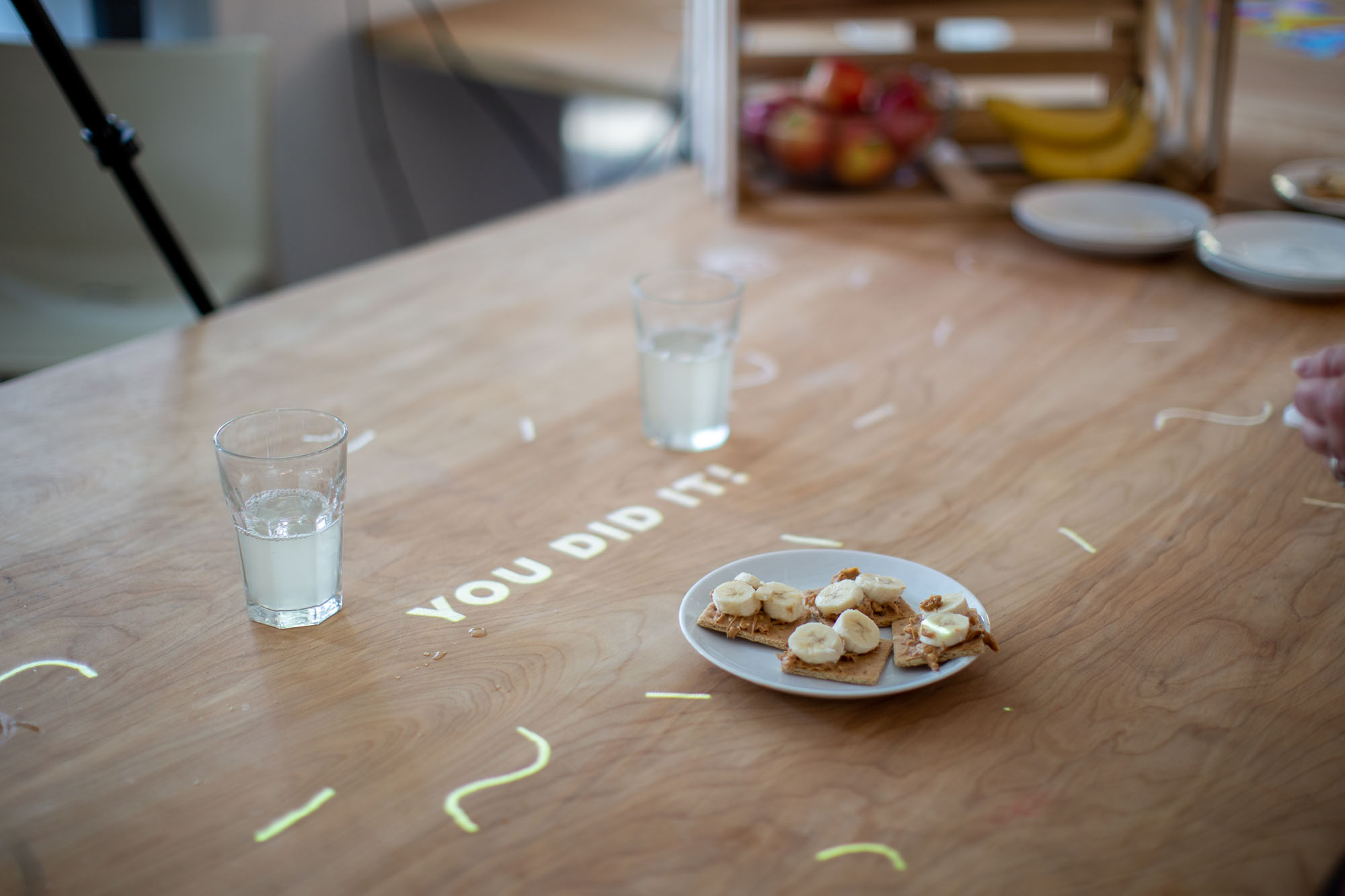